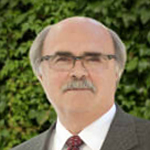 Steve Price is the Executive Director of the Advancing the Bioeconomy sector of AI Bio Solutions. He looks for opportunities to enhance the economy of Alberta through the agriculture and forestry sectors. In this position, he often offers assistance to entrepreneurs and researchers. Steve is a graduate of the University of Toronto. He commenced his career in Saskatchewan with the Department of Natural Resources, Forestry Branch. He held numerous positions with the Saskatchewan Government, including: Manager of Forestry Inventory and Manager of Silviculture.

In 1983, Steve joined Forestry Canada as Senior Development Officer at the Northern Forestry Centre in Edmonton. He became Program Director of Regional Development in 1989. He also served as the Director of Operations for the Canadian Forest Service in Ottawa before returning to Edmonton, where his responsibilities included: management of forestry research including climate change, fire systems, applied silviculture, social science and landscape management research units. During this time he also managed operational programs, including: the Model Forest Program and the First Nations Forestry Program in Manitoba, Saskatchewan, Alberta and the North West Territories. Steve also has managed international projects in Southern Africa and South East Asia. His experiences have made him a valued member of the Alberta Innovates Bio Solutions executive team.